This Year Has Clearly Been Tough for Most Investors, But What's Next?

Last week, we discussed the ongoing market volatility and reiterated just how difficult this year has been for all types of investors. The unabated price declines this year in traditional “safe assets” like U.S. treasuries and corporate bonds is really breathtaking. The coincident selloff in stocks makes this nothing short of a generationally difficult environment. At this point, I am just stating the obvious. What matters now is – what does this look like going forward over the next few weeks, and perhaps months?

I can tell you that as extreme as the past four months have been, as I see it, the rotation we are seeing in asset classes is typical of the never-ending economic cycle itself. We saw bond prices peak first last fall and began to drop, as the reality of higher interest rates down the line sunk in. Next, we saw a peak in growth stocks in late November, followed by an immediate and still ongoing deleveraging in technology and other highly valued parts of the equity market. In January, we saw the selloff in equities begin to spread to other more traditionally stable areas of the equity complex. All the while, the rise in interest rates accelerated in the face of rampant inflation. All of this of course is largely tied to and a natural result of rising commodity prices. Things like energy, materials, copper and lumber began rising precipitously during 2021. It is these sectors that are often the last men standing at the end of a bull market cycle, while it is their persistent resilience that causes the bear market to begin. Bonds turn first, followed by stocks and finally commodities. It seems to me that it is right about where we are now, waiting for commodities to fall. When energy prices begin to fall that is a clear sign to me that the bull market is over and a recession has begun. The bear market in stocks of course will already be well under way at that point. What I have described is visually depicted in a well-known sector rotation model developed many years ago by Sam Stovall. I have included it below for your review, along with an intermarket analysis chart of the economic cycle. To me, it is interesting how relationships within asset classes are consistent. In its simplest terms it is like a teeter totter. When one end goes up the other goes down. 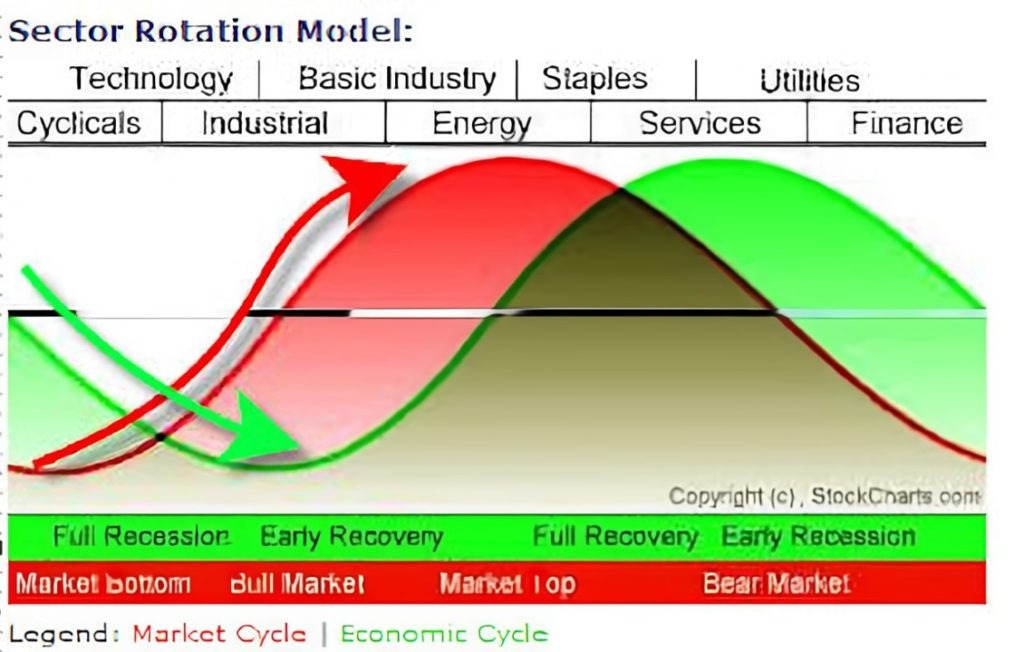 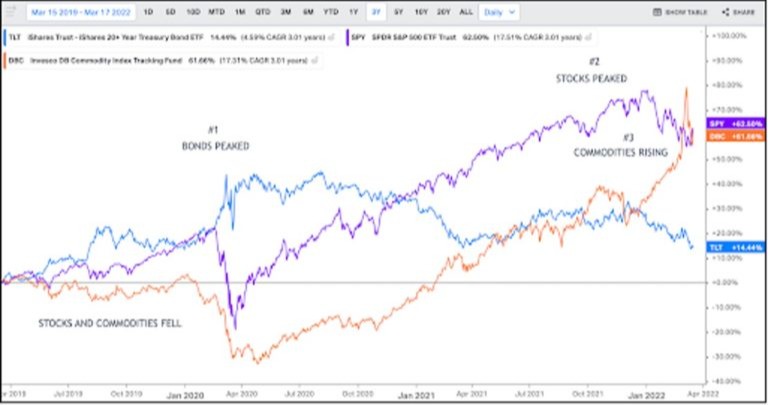 At Cabana, we signaled a reallocation to our Bearish Scene during the second week of this month. We pointed out that despite our move to lower beta assets like short term treasuries, bonds, gold and the U.S. dollar, stocks were poised to bounce simply because they were oversold, and explosive rallies are a hallmark of bear markets. Art Cashin says this is what keeps the short sellers honest.

We saw that rally in stocks begin last week and it carried into the close on Tuesday. By Wednesday, selling had resumed in full force. This volatility in both directions is likely to continue over the short term. There seems to still be a lot of work to do before this old bull market is carried off the field of battle and the bear has the run of things. Only then can a new bull market begin.