Market Outlook From Our Partners At Foundations

Markets took a step back after the prior week’s impressive rally. The same culprits showed up to dampen investors’ appetite for risk assets- growth concerns, inflation, and hawkish central bank rhetoric. Economic data was notably skewed to the negative and highlighted by a very weak consumer sentiment reading. The Atlanta Fed’s estimate of 2nd quarter GDP was slashed to -2.1%, and their third estimate of Q1 GDP was revised to -1.6%. If the 2nd quarter GDP is, in fact, negative, it suggests the economy is already technically in recession. Semiconductors took the brunt of this week’s selloff, falling 9.3%, as Micron and Taiwan Semiconductor reduced their outlook and fostered concerns for corporate earnings growth. The Core PCE and GDP Price Deflator continued to show inflation well above the Fed’s mandate and induced more hawkish comments from Fed officials. San Francisco Fed President Mester announced that she was comfortable with a 75 basis point hike in the July meeting. At an ECB forum, Chairman J Powell reiterated that price stability was paramount even at the cost of economic growth.

The S&P 500 fell 2.2%, the Dow lost 1.3%, the NASDAQ led declines giving back 4.1%, and the Russell 2000 shed 2%.   Countercyclical sectors such as Utilities, Consumer Staples, and Healthcare outperformed. Consumer Discretionary, Financials, and Large Cap Growth issues underperformed. Growth concerns coupled with the notion that inflation may have peaked put an excellent bid into US Treasuries. The 2-year note yield fell twenty-three basis points to 2.83%. Similarly, the 10-year yield fell twenty-four basis points to 2.89%. The price of WTI increased by $1.00 to $108.67 a barrel and helped the energy sector bounce. Gold prices fell by $21.6 or 1.1% to $1808 an Oz.  Copper prices continued to fall and may also be an indication of slower growth. Copper prices fell 3% to 3.62 an Lb. Crypto traded lower, with Bitcoin trading below 19k at one point. Grayscales’ bid to have an SEC-registered Spot Bitcoin ETF was rejected by the SEC and subsequently challenged by Grayscale. Finally, the US dollar was stronger against the majors. 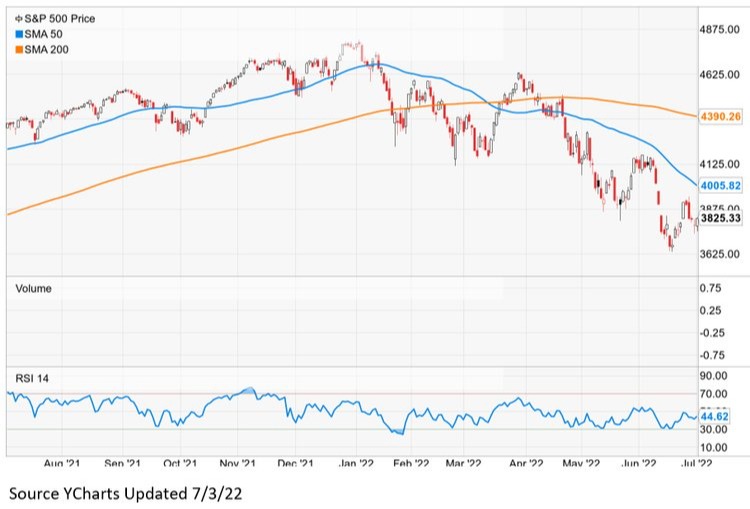