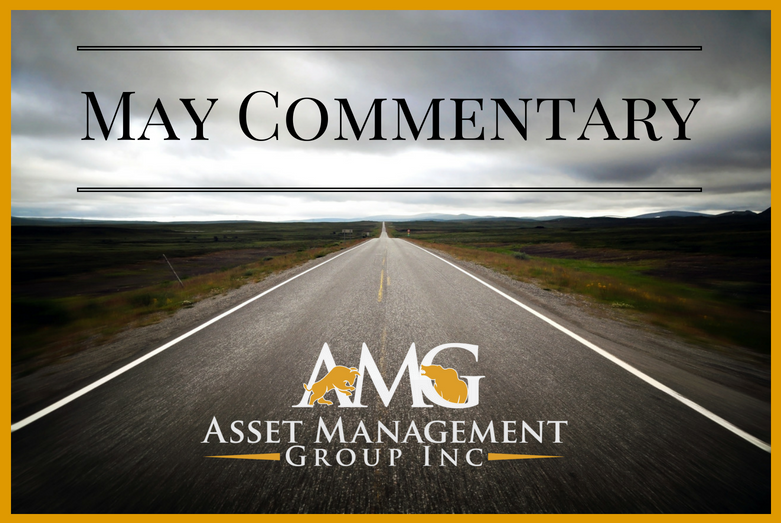 Global risk assets continued to rally in April.  First quarter earnings are coming in better than expected, Central banks around the globe remain accommodative, economic data saw improvement, US & China trade negotiations appeared to be going well, and the market fought through some key technical levels to find all-time highs.  The NASDAQ was the best performing US index in April with a gain of 4.74%.  The S&P 500 increased 3.93% in the month, while the Russell 2000 tacked on 3.34% and the Dow gained 2.56%.  International equities also did quite nicely in April- the MSCI Europe ex UK was up 4.2%, the MSCI Japan index gained 1.4%, and the MSCI Emerging markets increased by 2.1%.  The yield curve steepened over the course of the month as the 2-year note yield stayed put at 2.27% while the 10-year bond yield increased ten basis points to 2.51%.  Better than expected economic data coupled with supply concerns related to the expiration of Iranian oil waivers help lift crude along with the broader energy complex.  Oil rallied throughout the month, gaining nearly 6% to close at $63.80 a barrel.  Gold lost ground in the month, shedding $12 to close at 1286.2 an oz.

First quarter corporate earnings had been a source of concern for investors as analyst slashed earnings expectations for Q1 in the latter part of 2018.  These lower hurdles, on the margin, have been met with better than expected earnings in April which has helped push the markets higher.  Technology, industrials, transports, and financials have produced nice results.  Headlines on M&A and unicorn IPO’s also boosted market sentiment in the month.

Accommodative monetary policy has also bolstered the appetite for global risk assets.  There was no change to the Fed’s mantra in April- they continue to be data dependent and patient.  Chinese fiscal and monetary stimulus continues, and economic data suggest it has helped their economy improve.  Japan’s central bank indicated that would not change its current course of monetary policy and the ECB forecasted their rates to remain at the present level through 2019.  The ECB also announced a new form of QE to help foster bank lending conditions through a new series of Targeted Long Term refinancing operations.

Global economic data has helped policymakers keep rates low.  In the US we saw an excellent rebound in March employment figures- February figures were dismal (revised in March to 33k from 20K) but likely influenced by the government shutdown.  The March Non-Farm Payroll number came in at 196k versus an expectation of 160k, the unemployment rate stayed steady at 3.8%, and hourly earnings came in up 0.1% versus 0.2%.  Q1 GDP was also announced in April, it increased at an annual rate of 3.2%, well ahead of the consensus estimate of 1.4%.  The GDP Price Deflator indicated no signs of inflation, coming in at 0.9% versus the expectation of 1.4%.  Data was also better out of China with PMI manufacturing data indicating expansion again with a 50.5 reading- the prior reading had indicated contraction.  China also produced a better than expected GDP report which showed an increase of 1.4% growth quarter over quarter and an annualized growth rate of 6.4%.

Additionally, the Chinese ISM number came in better than expected and also indicated expansion in the services sector.  European data and some data out of some of the emerging markets have not been as constructive.  The German IFO Business Climate Index indicated it was still in decline and South Korean GDP and exports missed their marks.  The IMF also took down its global growth estimates.

Optimism surrounding trade negations between the US and China helped markets throughout the month.  Trade delegate rhetoric appeared to be constructive; however, enforcement mechanisms and technology transfer continued to be sticking points.  President Trump indicated in the early part of April that there would be a resolution within a month.  On the other side of the pond, the EU provided the UK with an extension on Brexit until the end of October 2019.  The avoidance of a hard Brexit coupled with some surprisingly strong economic data propelled the UK market higher by 2.3% for the month.

The markets have had an incredible run from the lows set on Christmas Eve 2018.  Accommodative central banks along with decent economic data, better than expected earnings, and a technical breakout to new highs on the S&P seem rather inviting to investors.  That said, the market may be in for a bit of a correction here which is likely to be viewed as healthy given the move we have had off the lows.  As always, we highly suggest that you review risk tolerance with your clients and their corresponding investments regularly.  We are here to help, and if you have any questions, please feel free to give us a call.

The information in this Market Commentary is for general informational and educational purposes only. Unless otherwise stated, all information and opinion contained in these materials were produced by Foundations Investment Advisers, LLC (“FIA”) and other publicly available sources believed to be accurate and reliable.  No representations are made by FIA or its affiliates as to the informational accuracy or completeness.  All information or ideas provided should be discussed in detail with an advisor, accountant or legal counsel prior to implementation. No party, including but not limited to, FIA and its affiliates, assumes liability for any loss or damage resulting from errors or omissions or reliance on or use of this material.

The views and opinions expressed are those of the authors do not necessarily reflect the official policy or position of FIA or its affiliates.  Information presented is believed to be current, but may change at any time and without notice.  It should not be viewed as personalized investment advice. All expressions of opinion reflect the judgment of the authors on the date of publication and may change in response to market conditions. Due to rapidly changing market conditions and the complexity of investment decisions, supplemental information and other sources may be required to make informed investment decisions based on your individual investment objectives and suitability specifications. You should consult with a professional advisor before implementing any strategies discussed. Content should not be viewed as an offer to buy or sell any of the securities mentioned or as legal or tax advice. You should always consult an attorney or tax professional regarding your specific legal or tax situation. Investment advisory services are offered through Foundations Investment Advisors, LLC, an SEC registered investment adviser.