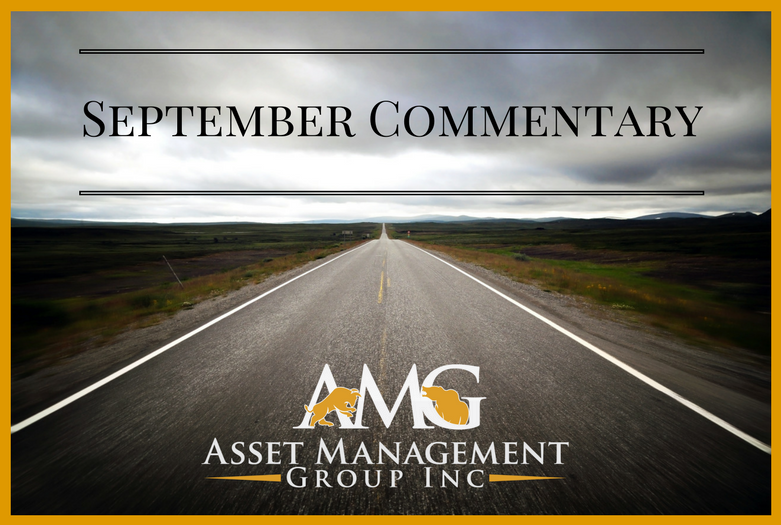 Equity markets around the globe bounced back from the sell-off we had in August. Uncertainties around trade continued to be in focus for investors as the US and China countered each other’s policies. The continuing saga of Brexit was also front and center during the month and continues to leave investors with numerous outcomes to ponder. An attack on one of Saudi Arabia's most productive oil assets sent oil soaring and reinforced the geopolitical tensions within the Middle East. Economic data continued to suggest the global economy is slowing and prompted monetary policy changes in the US and European Union. The S&P 500 gained 1.72% over the month while the Dow tacked on 1.95%. The Russell 2000 posted a gain of 1.91%, and the NASDAQ lagged its counterparts with an increase of just 0.46%. During the month, high flying technology and cyclical names took a back seat to value-oriented issues.  International developed and emerging markets also fared well in the month.

Developed international markets gained 3.16%, while emerging markets increased by 1.69%. Safe-haven assets such as US Treasuries and Gold sold off during the month as investors reassessed the outsized move seen in these assets in August. The 2-year yield increased 12 basis points over the month and closed at 1.62%. The 10-year yield ticked up 17 basis points to close at 1.68%. Gold lost a bit of its luster, falling ~$56 or 3.6% and closing at $1473 an Oz. It was a very volatile month for oil. The attack on Saudi Arabia's oil fields sent crude up nearly 20% in overnight trading. However, subsequent comments regarding a better than expected supply recovery timeline from Saudi officials coupled with a tempered response from the US and Saudis against Iran hindered the rally.  Oil closed the month down ~$1 with WTI closing at 54.12 a barrel.

Gyrations in trade rhetoric between the US and China continue and are a considerable source of uncertainty for the markets. Trade concerns have been top of mind for investors for quite some time now and have undoubtedly caused some of the weakness seen in global economic data. The two sides traded tit for tat during the month, with both sides seemingly de-escalating the situation for most of the month. However, in the last week of the month, reports out of Bloomberg news suggested that the White House is contemplating measures to stem US investment in China and is considering delisting Chinese companies listed on US exchanges. The report sent markets lower and again cast doubt that anything constructive will come out of meeting set between the two nations in the middle of October.

The UK’s plan to exit the European Union also known as Brexit stole headlines throughout the month. During September, Parliament passed legisla- tion that would block a no-deal Brexit and effectively require the government to ask for an extension from the EU. In response, the prime minister suspended parliament, which subsequently was ruled to be an unlawful act. The drama continues, and another deadline looms, which only adds to the uncertainty in global markets.

Geopolitical tensions in the Middle East increased markedly in September. An attack on one of Saudi Arabia’s most productive oil fields allegedly by Iran sent oil markets into disarray.  The attacks come after numerous other attacks on oil tankers and other assets in the region.  The worst sce- nario for supply disruption was, however, avoided, and a tempered response from Saudi Arabia and the US helped to calm oil markets. More stringent sanctions have been placed on Iran because of the attacks, but it is more than likely that Iran will continue to antagonize to gain con- cessions on current sanction policies.

A slowdown in global economic data continued into September. On the margin, the US economic data still appears better than the rest of the world. However, an indication that US manufacturing is in contraction, along with a slower pace of hiring and a decrease in aggregate hours worked, is a concern.  These concerns appear to be influencing the continued decline of sentiment surveys.  Industrial production in China contin- ues to decline, and their retail sales also have slumped most recently. In Germany manufacturing data hit lows not seen in a decade. In response to the data, global central banks have continued to add various types of stimulus. Here in the US, the Federal Reserve decided to cut its Fed Funds rate by 25 basis points, and this comes after a prior 25 basis point cut in July. The decision was widely expected but also saw three Federal Reserve Presidents disagree with the policy. The EU also cut its deposit rate by ten basis points from -0.4 to -0.5-, yes these are negative rates, crazy. Additionally, the ECB announced that it would initiate another round of Quantitative Easing (QE) in an aim to stimulate their economies.